A new report from Japan shows that the majority of Covid deaths in the under-20’s had no underlying medical conditions.

No underlying condition was found in nearly 60 pct of patients aged under 20 who contracted COVID-19 and died in Japan after omicron variants became prevalent, the National Institute of Infectious Diseases has said.

Excluding those not eligible for novel coronavirus vaccinations, 90 pct of the cases had not been inoculated at all, according to an analysis by the institute, released Wednesday.

In Japan, only three infected people under 20 were confirmed to have died by the end of last year before the first omicron variant began to spread, while there were 62 fatalities between January and September this year.

The institute looked into 50 of the 62 cases, excluding those who died for reasons considered unrelated to the coronavirus, such as an accident.

The institute found that 21 cases, or 42 pct, had underlying conditions such as a central neurological disease and a congenital heart disease while 29 cases, or 58 pct, had none.

Japan’s recent spike in Covid deaths, which we covered in this post, took another turn for the worse today, and is best shown by the following chart which gives updated daily figures: 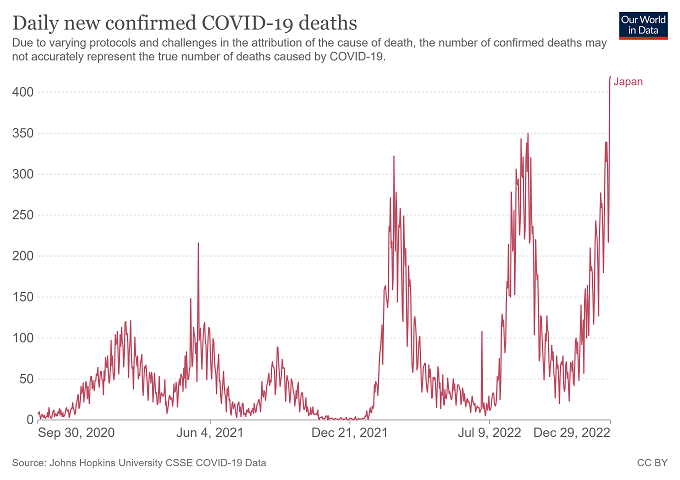