WHO – “The currently affected Mubende district [of Uganda] has no international borders – nevertheless, the risk of international spread cannot be ruled out due to the active cross-border population movement.”.

Outbreak at a glance

As of 25 September 2022, a cumulative number of 18 confirmed and 18 probable cases have been reported from Mubende, Kyegegwa and Kassanda districts, including 23 deaths, of which five were among confirmed cases (CFR among confirmed cases 28%). This is the first Ebola disease outbreak caused by Sudan virus (SUDV) in Uganda since 2012.

Description of the outbreak

On 20 September 2022, the health authorities in Uganda declared an outbreak of Ebola disease caused by Sudan virus (SUDV), after a case was confirmed in a village of Madudu sub-county in Mubende district, central Uganda.

The case was a 24-year-old male who developed a wide range of symptoms on 11 September including high-grade fever, tonic convulsions, blood-stained vomit and diarrhoea, loss of appetite, pain while swallowing, chest pain, dry cough and bleeding in the eyes. He visited two private clinics, successively between 11-13 and 13-15 September without improvement. He was then referred to the Regional Referral Hospital (RRH) on 15 September where he was isolated as a suspected case of viral haemorrhagic fever. A blood sample was collected on 17 September and sent to the Uganda Virus Research Institute (UVRI) in Kampala where RT- PCR tests conducted were positive for SUDV on 19 September. On the same day, the patient died.

Results of preliminary investigations identified a number of community deaths from an unknown illness in Madudu and Kiruma sub-counties of Mubende district reported in the first two weeks of September. These deaths are now considered to be probable cases of Ebola caused by SUDV.

Epidemiology of the disease

Sudan virus disease is a severe, often fatal illness affecting humans. Sudan virus was first reported in southern Sudan in June 1976, since then the virus has emerged periodically and up to now, seven outbreaks caused by SUDV have been reported, four in Uganda and three in Sudan. The estimated case fatality ratios of SVD have varied from 41% to 100% in past outbreaks.

The virus is introduced into the human population through close contact with the blood, secretions, organs or other bodily fluids of infected animals such as fruit bats, chimpanzees, gorillas, monkeys, forest antelope or porcupines found ill or dead or in the rainforest. The virus then spreads through human-to-human transmission via direct contact (through broken skin or mucous membranes) with either blood or body fluids of a person who is sick with or has died from SVD or objects that have been contaminated with body fluids (like blood, faeces, vomit) from a person sick with SVD or the body of a person who died from SVD.

The incubation period ranges from 2 to 21 days. People infected with Sudan virus cannot spread the disease until they develop symptoms, and they remain infectious as long as their blood contains the virus. Symptoms of SVD can be sudden and include fever, fatigue, muscle pain, headache, and sore throat later followed by vomiting, diarrhoea, rash, symptoms of impaired kidney and liver function. In some cases, the patient might present both internal and external bleeding (for example, bleeding from the gums, or blood in the stools).

The diagnosis of SVD can be difficult, as early nonspecific manifestation of the disease may mimic other infectious diseases such as malaria, typhoid fever and meningitis. Confirmation is made using numerous diagnostic methods including RT-PCR. Supportive care – rehydration with oral or intravenous fluids – and treatment of specific symptoms improve survival.

There are no licensed vaccines or therapeutics for the prevention and treatment of Sudan virus disease.

In the absence of licensed vaccines and therapeutics for prevention and treatment of Sudan virus disease, the risk of potential serious public health impact is high. Community deaths and care of patients in private facilities and hospitals and other community health services with limited protection and infection prevention and control measures entail a high risk of many transmission chains. Investigations are ongoing to determine the scope of the outbreak and the possibility of spreading to other districts. Importation of cases to neighbouring countries cannot be ruled out at this stage.

According to the information currently available, the overall risk has been assessed as high at national level considering: (i) the confirmed Sudan virus and the lack of an authorized vaccine (ii) the possibility that the event started three weeks before the identification of the index case and several transmission chains  have not been  not tracked; (iii) patients presented at various facilities with suboptimal infection, prevention and control (IPC) practices including inadequate use of personal protective equipment (PPE); the patients died and were traditionally buried with large gathering ceremonies; (iv) although the country has developed an increased capacity to respond to Ebola outbreaks over recent years, and has a local capacity that can be easily mobilized and organised with  available resources to mount a robust response, the system could be overwhelmed if  the number of cases increases and the outbreak spreads to other sub-counties, districts and regions, as the country simultaneously responds to multiple  emergencies, including anthrax, COVID-19, Rift Valley fever and Yellow fever, as well as flooding and prevailing food insecurity.

In addition, the outbreak was detected among individuals living around an active local gold mine. Mobility among traders of this commodity is likely to be high, and the declaration of the outbreak may cause some miners already incubating the disease to flee.

The currently affected Mubende district has no international borders. Nevertheless, the risk of international spread cannot be ruled out due to the active cross-border population movement. In addition, investigations are ongoing to establish transmission chains and the scope of the outbreak is yet to be determined.

At Regional and Global levels, the overall risk has been assessed as low.

In addition, investigations are ongoing to establish transmission chains and the scope of the outbreak is yet to be determined.

Health officials says that the seven escaped a surveillance health team over the weekend where they had been subjected to monitoring at the isolation center. Mubende District is the epicentre of the disease in Uganda. 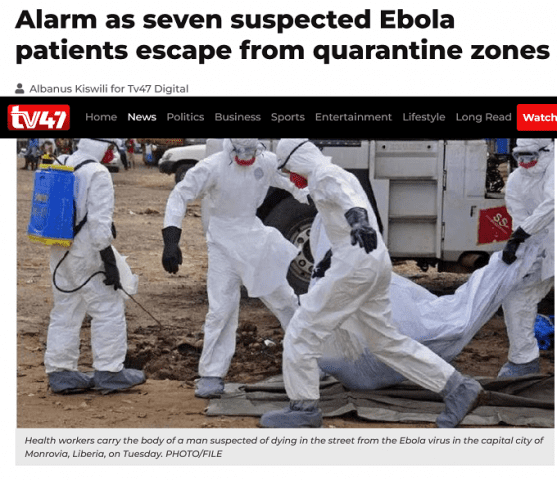 He said the 28-year-old man brought himself to the facility and collapsed immediately after arriving. “The patient who was bleeding from the nose and vomiting was helped by the doctors who put him in one of the intensive care units before samples were taken from him,” Dr Okello said.

He said this man narrated how he escaped with the other two from Mubende hospital isolation units and that one of them had travelled towards the Mutukula border. Another is hiding in Masaka city after he stopped at the Matanga trading centre in Masaka City.  “He says he doesn’t have relatives in Masaka but escaped from Mubende fearing that he could be quarantined or arrested,” Dr Okello said.

Image by DFID – UK Department for International Development, CC BY 2.0, via Wikimedia Commons