South Sudan’s government with support from the World Health Organization (WHO) said they have sent three samples out of five unconfirmed suspected cases of the Ebola viral disease (EVD) for testing in South Africa.

Alex Freeman, the Head of the WHO Infection, Prevention and Control (IPC) told journalists in Juba on Sunday that Uganda is currently battling to contain the spread of the Sudan strain of Ebola virus (SUDV) that has no ready vaccine.

On Sept. 20, health authorities in neighboring Uganda declared an outbreak of Ebola disease caused by the Sudan virus (SUDV) after a case was confirmed in the Mubende district of central Uganda.

President Salva Kiir was briefed by the Minister of Health, Hon. Yolanda Awel Deng on the country’s preparedness and response plans to curb the Ebola Virus Disease outbreak.

Minister Awel told the president that South Sudan has not confirmed any case of Ebola. She further stated that the ministry received suspected cases that are in isolation at the border but in stable condition.

Note: South Sudan does share a border with Uganda, but the distance between the current Ebola outbreak in Mubende, Uganda, and Tekakomi on the South Sudan border, is around 300 miles, or 500km.

“At the moment, we have five suspects we received since the preparedness of this EVD and one suspect passed on (died). The suspect is from Kiri, that is Kangapo in Kajokeji County,” said Kiir, adding that he had no history of recent travel to Uganda where a deadly outbreak has been confirmed.

Uganda’s Ministry of Health has released updated information on Ebola cases and deaths: 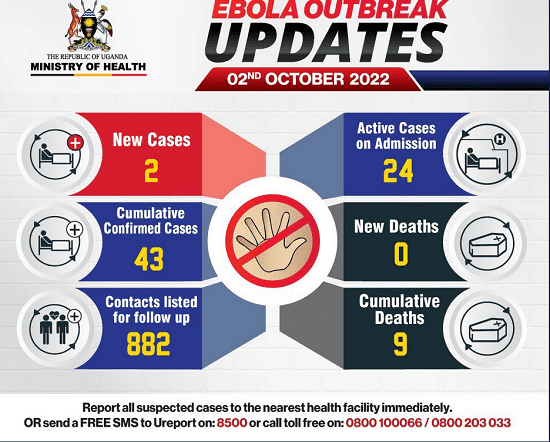 Ebola: “The risk of international spread cannot be ruled out” *2 updates*

Image by CDC Global, CC BY 2.0, via Wikimedia Commons