Uganda’s Ministry of Health has reported that seven more people have died of Ebola in the past few days, bring their running total to 17.

Uganda’s Ministry of Health on Monday said Ebola deaths in the country have risen to 17 from 10 registered two days ago.

Emmanuel Ainebyoona, a spokesperson for the Ministry of Health, in a statement issued in Kampala, the capital of Uganda, said the number of dead since the virus was first reported in the country on Sept. 20 now stands at 17. These new figures from uganda are completely at odds with those announced by the World Health Organisation just four days ago, however.

“So far, 63 confirmed and probable cases have been reported, including 29 deaths. Ten health workers have been infected, and four have died.”

You can read the report on that WHO statement here.

In another concerning development, the Ugandan newspaper The Monitor reports that Ugandan Health Minister, Dr Jane Ruth Aceng, has blocked the Uganda Virus Research Institute (UVRI) from overseeing the testing of the Ebola virus.

Highly placed sources in the government confirmed to this publication that the minister has given the powers of testing of Ebola to Kampala-based Central Public Health Laboratories (CPHL), which is directly under the Health ministry.

UVRI, the country’s top virus research centre,  is mandated by the government to monitor and conduct research on viral diseases and other infectious agents.

However, Dr Aceng, in a meeting with the Ebola task force on October 6 at Mubende District Council Hall, ordered the UVRI staff to vacate the Mubende Ebola Treatment Unit (ETU) immediately.

“I now state it clearly that if you are the UVRI staff and still here [in Mubende Ebola treatment unit], please go,” said Dr Aceng.  “No research will be conducted without my knowledge, never! And it has ended.”

With the WHO’s recent warning that Ebola could spread internationally, we hope that these conflicting reports don’t mean that the true scale of the outbreak in Uganda is being suppressed. After the catastrophic failure to prevent and contain the international spread of SARS-CoV-2, covering up the spread of Ebola would be a mistake of truly monumental proportions.

In response to the Ebola outbreak in Uganda, the US has wisely decided to reroute all passengers from Uganda to five airports across the country for screening.

UPDATE 1 – 11th October 2022: This happened in Nakasero Market, in the centre of Kampala yesterday evening. Ebola is not confirmed. Nakasero Market is in the centre of Kampala, Uganda. Click image to enlarge. 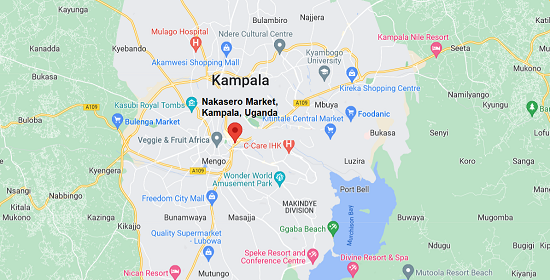 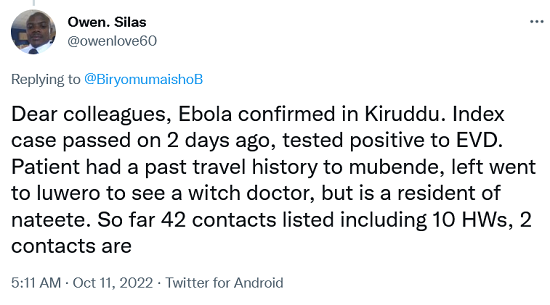 Kiruddu is in the southern area of Kampala, Uganda 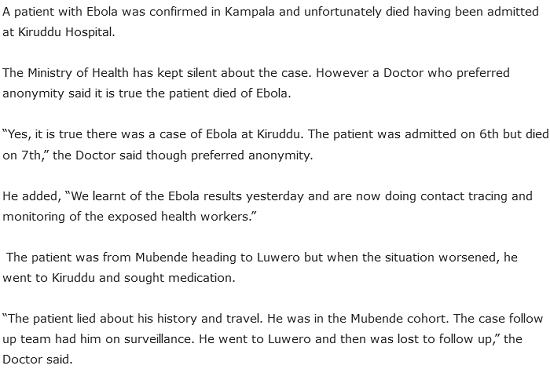 All departing and arriving passengers through Entebbe International Airport are currently being screened using modern thermo scanners to detect their temperature levels and also look out for any possible signs and symptoms of Ebola Virus Disease (EVD).

Dr Samuel Kigula, a port health officer at the airport, said, “Ebola screening was intensified in September when we heard of the outbreak in Mubende. We have all equipment to detect Ebola such as thermo scanners, and temperature guns to screen whoever is going or coming into the country.”

The doctor explained that resting positions and isolation stations whereby if you are found with high temperature, you’re put aside to rest within an interval of 10 minutes plus.

WHO: 63 confirmed and probable Ebola cases, 29 deaths in Uganda