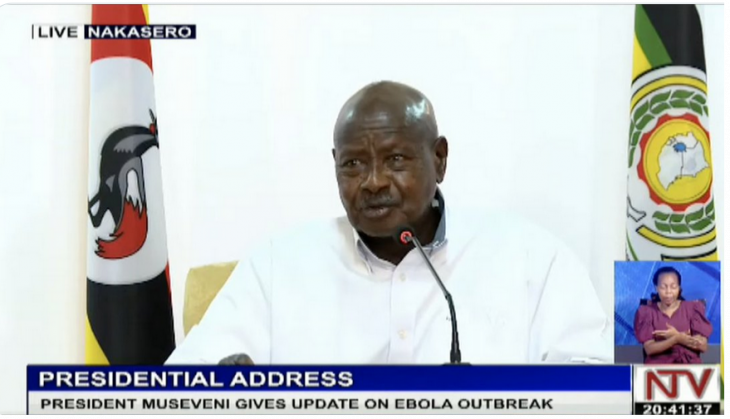 The President of Uganda, Yoweri Museveni, has announced a curfew in two areas of Uganda to combat the growth and spread of the Sudan Ebola virus.

Only cargo, government and emergency vehicles will be permitted to move in Mubende and Kasanda districts. They are not allowed to transport people in and out of the districts

Public, private transport and boda bodas are not permitted to move in Mubende and Kasanda districts to curb Ebola

People travelling across Mubende and Kasanda (crossing through the districts) are permitted to move, with police clearance. They are not allowed to stop or pick up a person in the two districts

Movements into and out of Mubende and Kasanda districts is prohibited

Schools in Mubende and Kasanda will remain open and learners are allowed to move while wearing their school uniforms. Temperature for learners and teachers should be tested daily. Any absence from school should be reported

Israel has a suspected Ebola case in quarantine – the first test for the virus was negative, but more tests will be carried out. Authorities in Mubende District have ruled out the possibility of closing schools even after confirming the first Ebola case at one of the primary schools in Mubende municipality.

A raft of alert guidelines will, however, be robustly enforced in the schools, with visitation days taken off the table as the ground zero of Uganda’s latest Ebola outbreak looks to get ahead of another headache.

“It is true that we have a confirmed positive Ebola case for a seven-year-old pupil, but the surveillance and medical teams will continue to closely monitor the health of the other pupils at the same school. The health teams have a set of strict guidelines for schools,” Ms Rose Mary Byabasaija, the Mubende Resident District Commissioner, said on Friday.