The Monitor newspaper is reporting that Ebola cases in Kampala, Uganda have risen to 14.

Ebola cases in Kampala have risen to 14 after nine more people tested positive, the Ministry of Health has announced.

The Health Minister, Dr Jane Ruth Aceng, in her tweet on Monday morning, said the nine new cases that had been under quarantine at Mulago hospital, are contacts of the original cases from Kassanda District.

“The nine cases are contacts of the fatal case who came from Kassanda District and passed on in Mulago Hospital,” Dr Aceng said.

According to the Ministry of Health, this brings cumulative confirmed cases to 84 in the country as of October 24, 2022.

The information also indicates that there have been 28 confirmed cumulative deaths, and 26 recoveries since the first Ebola case was confirmed in the country on September 19. 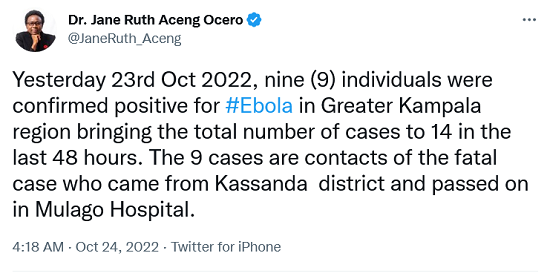 WHO: There may be more chains of Ebola transmission *1 Update*