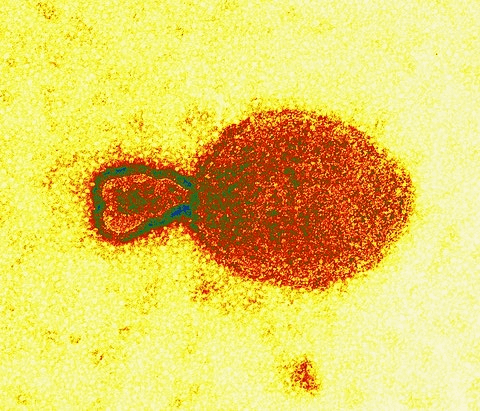 The Langya henipavirus, which can be transmitted from animals to humans, has been discovered in China, with 35 human infections reported so far.

A study titled “A Zoonotic Henipavirus in Febrile Patients in China” that was published in the New England Journal of Medicine on 4th August 2022 said that a new henipavirus associated with a fever-causing human illness had been identified in China.

The study said an investigation identified 35 patients with acute infection of the Langya henipavirus in China’s Shandong and Henan provinces, and that 26 of them were infected with the Langya virus only, with no other pathogens.

When asked for confirmation, CDC Deputy Director-General Chuang Jen-hsiang (莊人祥) on Sunday that said according to the study, human-to-human transmission of the virus has not been reported, and that a serological survey of domestic animals found 2 percent of the tested goats and 5 percent of the tested dogs were positive.

Preprint: A Zoonotic Henipavirus in Febrile Patients in China

Incubation period is approximately 5–16 days (and rarely up to 2 months). Both Hendra and Nipah virus infections can cause a severe influenza-like illness with fever, myalgia, headache, and dizziness. This may progress to severe encephalitis with confusion, abnormal reflexes, seizures, and coma; respiratory symptoms may also be present. Relapsing or late-onset encephalitis can occur months or years after acute illness. The case-fatality ratio of Hendra virus is 57% (among 7 known human cases, 4 were fatal). Case-fatality ratios for Nipah virus infection are 40%–70% but have been 100% in some human outbreaks.

Henipavirus can cause severe disease in animals and humans and are classified as biosafety Level 4 viruses with case fatality rates between 40-75 percent, according to the data from World Health Organization (WHO), highlighting that this is much higher than the fatality rate of the coronavirus.

However, there is currently no vaccine or treatment for Henipavirus and the only treatment is supportive care to manage complications.

Just last week, on the 3rd August 2022, The Wuhan Institute of Virology was accused of experimenting with Nipah viruses in 2019 by a speaker at a US Senate Panel’s Hearing on Gain-of-Function Research:

“In December 2019, they were doing synthetic biology on a cloning vector of the Nipah virus, which is 60% lethal. We just experienced a 1% lethal virus,” Quay said. “My estimate is, that could set us back a millennium. The Black Plague was a 20% lethal event, and it was a 250-year event for civilization to return.”


Swine Flu: First human infection from pigs in the US in 2022

Image by CSIRO, CC BY 3.0, via Wikimedia Commons