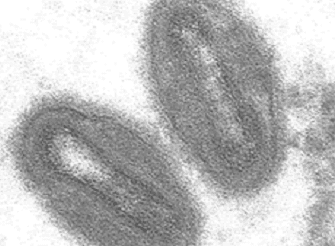 “Using a structured format, we describe the greater than 10-fold increase in confirmed, probable, and/or possible monkeypox, cases over the past 5 decades, from 48 cases in the 1970s to 520 cases in the 1990s.

One .. possible factor influencing the resurgence of monkeypox might be the genetic evolution of the monkeypox virus.

An analysis of the virus genome diversity of 60 samples obtained from humans with primary and secondary cases of infection from Sankuru District, DRC, led to the detection of four distinct lineages within the Central African clade and revealed a gene loss in 17% of the samples that seemed to correlate with human-to-human transmission.”

Research by Bavarian Nordic, the makers of the Monkeypox vaccine, posted in February 2022: The changing epidemiology of human monkeypox—A potential threat?

See also: Is monkeypox evolving? Scientists believe it may now be more transmissible

The monkeypox virus may have evolved to be better at spreading between people, the makers of the disease’s vaccine warned last year. Experts at Bavarian Nordic — which makes the world’s only non-replicating smallpox and monkeypox jab, called Imvanex — wrote a paper in December 2021 foreshadowing the current global outbreak.

President Biden said Monday that he did not believe a quarantine to prevent the spread of monkeypox in the United States would be necessary, saying there are sufficient vaccine doses available to combat any serious flare-up of the disease.