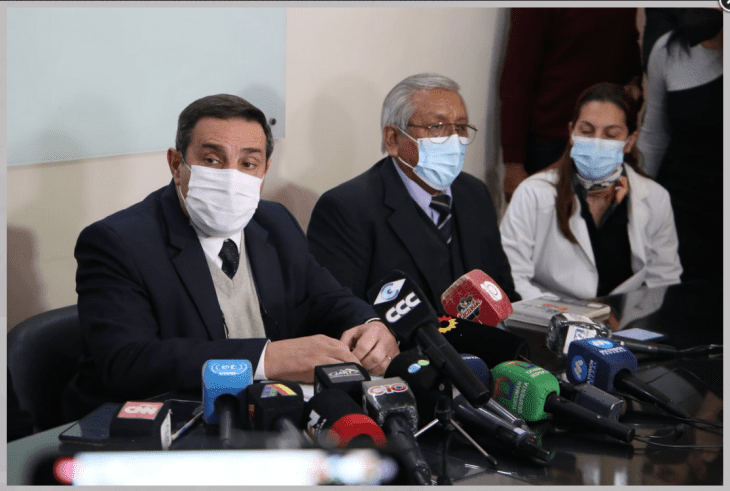 “..some of the samples sent to Malbrán confirmed that the name of the bacteria that produces this outbreak of bilateral pneumonia … is legionella pneumophila“..

“The Argentine Ministry of Health reports that a new [tenth] patient linked to the conglomerate of cases of pneumonia of unknown origin has been detected.”

Case number 10 is an 81-year-old male patient with comorbidities hospitalized in serious condition, with ARM, in the public sector.

At this time we have three patients who are still hospitalized, of which two are on mechanical ventilation and one on non-invasive ventilation; All three in serious condition. The other three patients are in an outpatient condition with less serious follow-up and, unfortunately, three have died¨.

At the moment, negative results have been obtained in urinary antigen for Legionella, detection of Antibodies for Coxiella, panel of 12 respiratory viruses, hantavirus, Elisa IgM, real time PCR for histoplasma and microagglutination for leptospirosis. In addition, today genetic material was delivered to the genomic platform for total DNA sequencing using the metagenomic technique.

We had information from the Malbrán Institute and so far all the studies that we had as negative -for Covid, Hantavirus and some strains of Legionella- are also giving negative results there. We continue to carry out the research protocol for blood cultures, sputum cultures, urine cultures and all the viruses and bacteria that we have available in the province.

“The Ministry of Public Health reports the death of a patient linked to the conglomerate of cases of pneumonia of unknown origin.

This is a 48-year-old male patient with comorbidities, who was hospitalized in serious condition in the public sector.”

This Saturday, the national senator for Tucumán Pablo Yedlin (Frente de Todos) announced that the first samples sent to the Malbrán Institute from the outbreak of bilateral pneumonia in our province yielded result positive , and that the Minister of Health, Carla Vizzotti , would be arriving in the next few hours to our province in the next few hours to confirm it officially.

” The latest information we have speaks of the possible visit of Minister Vizzotti, surely with people from Malbrán, to announce that some of the samples sent to Malbrán confirmed that the name of the bacteria that produces this outbreak of bilateral pneumonia from the intensive medical light therapy is legionella pneumophila ,” Yedlin announced on Detonated.

The national senator explained that “legionella is a bacterium known for many years, in 1975 it was described for the first time; it is called legionella because the first outbreak occurred in a former legionnaires’ center and that is where the name was taken”.

“There have been outbreaks far and wide throughout the world: Argentina has one, in San Antonio de Areco in 2013, of 14 people in intensive care: doctors, nurses and the occasional patient also with some cases unfortunately very serious,” he explained.

The president of the Health Commission of the Upper House indicated that legionella “is a bacterium that has the ability to be tremendously aggressive or give mild cases to people with previous health problems due to age, condition or respiratory problems .”

” It is sensitive to certain antibiotics that were given in Tucumán from the beginning ,” he stressed, and asked to stop referring to the outbreak as an “unknown” disease.

” If it had been legionella or another similar bacterium, the truth is that we were facing a synchronous outbreak of bilateral pneumonia and not an unknown disease ,” he emphasized.

In this sense, he stressed that “it was important to remove the fear, from the outbreak of Coronavirus… of the Tucumans of an unknown disease”, and stated that “the fear of this disease was enough, but if one calls it unknown, we don’t know how to treat it or how it spreads, and this is known”.

” All the cases report at that beginning and that same moment ,” he remarked. This morning case 11 was confirmed and there are already three deaths from the outbreak originating in Medical Light.

The portfolio led by Minister Luis Medina Ruiz reported that “case number 11 is a 64-year-old male patient with comorbidities, hospitalized in serious condition with mechanical respiratory assistance, in the private sector.”

Thus, there are already 11 infected and three deceased from the Medical Light Case, which began with symptoms between August 18 and 23.

The three people who died had comorbidities: it is a 68-year-old doctor, a 45-year-old nurse and a 70-year-old patient from that sanatorium. 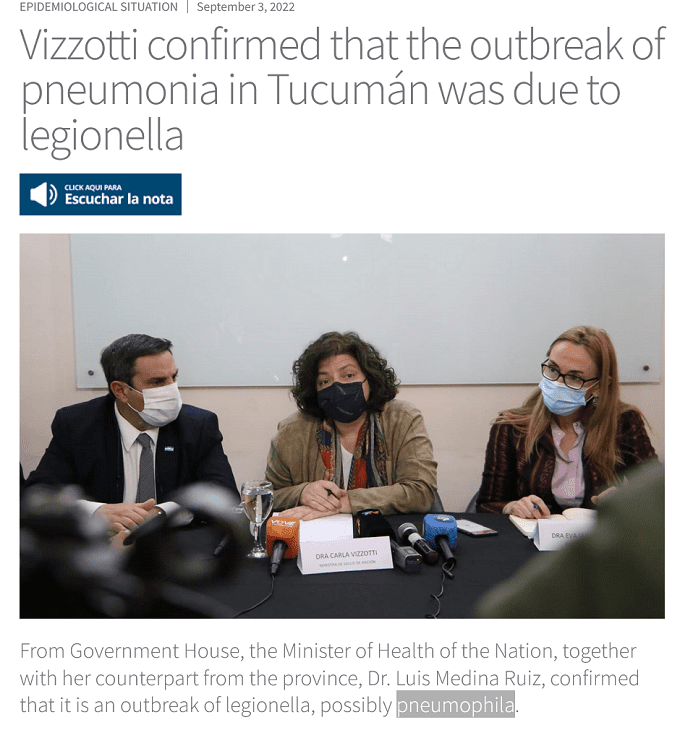 A fourth patient has died in the mysterious outbreak of a pneumonia of unknown origin in Tucumán, as a local outlet reports that at least one of the 11 infected have tested positive for Legionnaires’ disease.

WHO: Legionellosis outbreak in Tucuman, Argentina