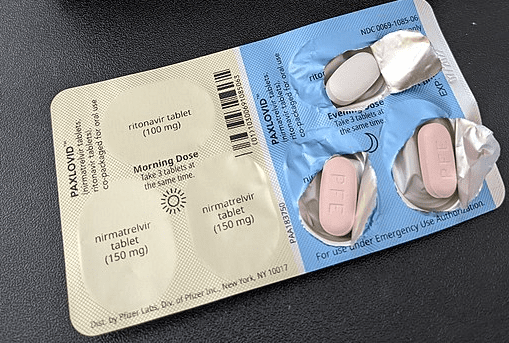 There are some anecdotal reports on social media today about Covid-19 infections rebounding a few days after taking Paxlovid. The rebound effects could be caused by reinfection, the biphasic effect of the virus, Paxlovid not clearing the infection completely, or by another unknown mechanism.  If you are taking Paxlovid, then you should probably read up on this.

Looking for intel from #medtwitter and covid high risk folks here. My husband, who has an underlying immune dysfunction disorder, had covid, got paxlovid pretty quick, did well, tested negative (rapid antigen) 5 days ago, was asymptomatic. Now symptomatic and positive. 1/n

PSA I’ve now heard of several cases of a biphasic symptom and testing pattern for BA.2 from people that rapid test themselves liberally. They’re sick, they test positive, they feel better, they test negative, and a few days later symptoms come back and they’re positive again.

OMG. You’re the 2nd person I’ve read today with nearly my exact same situation! Tested + and felt crappy, started Paxlovid. By day 3-4, was feeling better and started testing – on rapid tests. Many tests (I also had a stockpile), 3 brands.

Happened to me too! Negative Day 9 after Paxlovid, faint positive today Day 10 with cold symptoms.

I know someone with the same story but when the symptoms returned 3 weeks later, they died within 24 hours

Wish I had known this last week. I feel worse now than before I took it. https://t.co/aYrO2gs5S6

Update on LC symptoms after Paxlovid: It has been 30 days since my first dose, and my headache symptoms have returned. Fatigue symptoms still gone. Though I was testing antigen- for a while, today I tested + again. Maybe I needed longer course; regardless, we need more research.

Twitter and Reddit have been filled with patients and doctors sharing their experiences and hypotheses over the past few days, including John Donoghue, a 71-year-old emeritus physics professor in Amherst. “We had three cases in the house with the same pattern,” Donoghue said, in an interview.

Donoghue, his wife, and her 95-year-old mother all were infected with COVID in the last month. All three received Paxlovid, felt better, and tested negative on rapid tests for four or five days. Then their symptoms returned and each one tested positive again.

“Our findings suggest that viral replication and COVID-19 symptoms may recur after very early treatment with NM/R before natural immunity is sufficient to fully clear SARS-CoV-2.”

U.S. government researchers are planning studies of how often and why coronavirus levels rebound in some Covid patients who have completed a five-day course of treatment with Pfizer Inc.’s Paxlovid.

Most patients improved rapidly after treatment with NM/R and had negative antigen or PCR tests prior to relapse on Days 9-12 of their illness. Relapse symptoms were described most frequently as cold symptoms, though some patients experiencing a recurrence of fatigue and headache. All relapses resolved without additional antiviral treatment. Viral load during relapse was comparable to levels during initial infection.

Sequencing in three patients indicated that relapse was not due to a treatment-emergent mutation or infection with a different viral strain. One patient transmitted SARS-CoV-2 to two family members during relapse. The presence of high viral load and the occurrence of one transmission event suggest that patients with relapse should isolate until antigen testing is negative.”

NOTE: The original tweet by Andrew Teman that started this thread has since been made private