One of the world’s top Covid labs explains how Omicron XBB.1.5 has learned new tricks to become more transmissible than other SARS-CoV-2 variants.

1) I wanted to summarize what is known about the new XBB.1.5 variant of SARS-CoV-2, which is starting to generate a lot of interest. (There are no new scientific results in this thread, it simply aggregates previously reported results for those not following topic closely.) 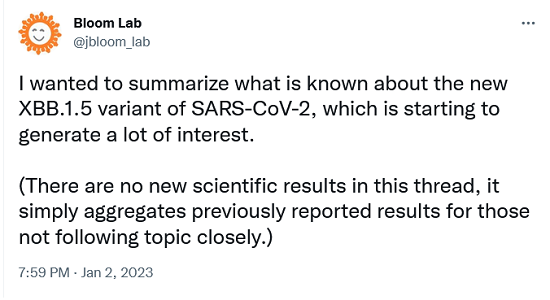 2) Reason people are discussing XBB.1.5 is because it’s so transmissible. Below are estimates of current Rt (measure of transmissibility) of different variants in US from @trvrb’s group. XBB.1.5 more transmissible than other variants like BQ.1.1 that until recently dominated in US 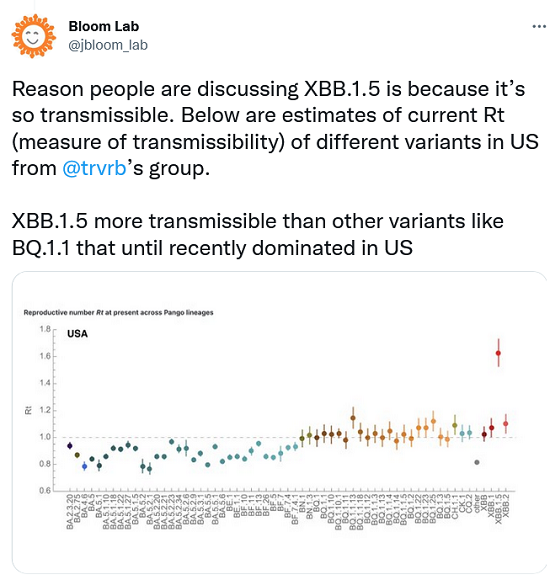 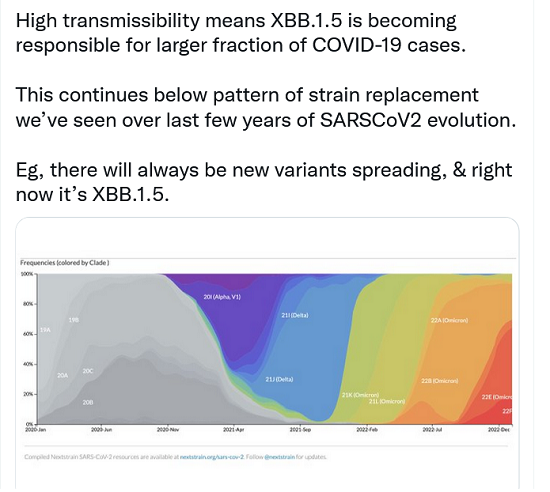 4) A scientifically interesting aspect of XBB.1.5 is we pretty much understand what mutation made it so transmissible, the mechanism by which the mutation acts, and why it took so long for the mutation to emerge.

5) XBB.1.5 is a descendant of XBB.1, which descends from XBB, which evolved through recombination between two descendants of the earlier Omicron BA.2 variant 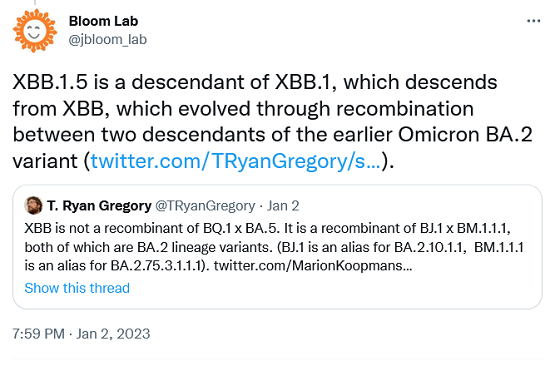 6) The parental XBB and XBB.1 variants were already notable because they were fairly transmissible & had lot of antibody escape, as shown by @yunlong_cao et al & others (https://nature.com/articles/s41586-022-05644-7). However, XBB and XBB.1 were not as transmissible as XBB.1.5. 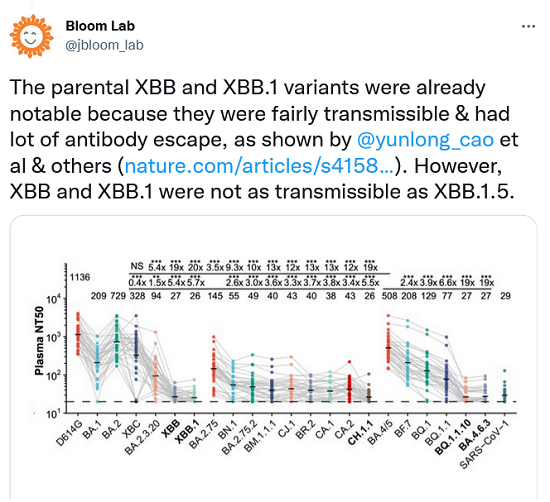 7) One of the sites that is mutated in the parental XBB/XBB.1 variants is 486 in the RBD. 486 has been a major site of antibody escape going back to the earliest variants (see image below from our antibody-escape calculator https://jbloomlab.github.io/SARS2_RBD_Ab_escape_maps/escape-calc/). 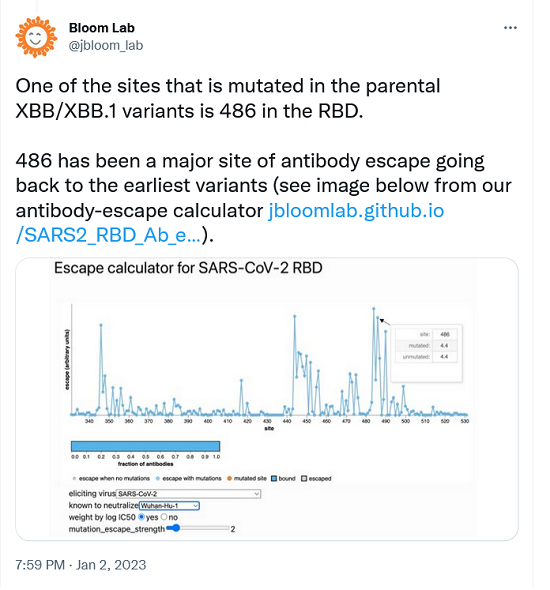 9) It’s easy to understand why it took longer for variants to emerge at site 486: mutations at 486 reduce ACE2 affinity, so benefit they provide in antibody escape comes at cost to receptor binding. See below for our deep mutational scanning data fromhttps://www.science.org/doi/10.1126/science.abo7896 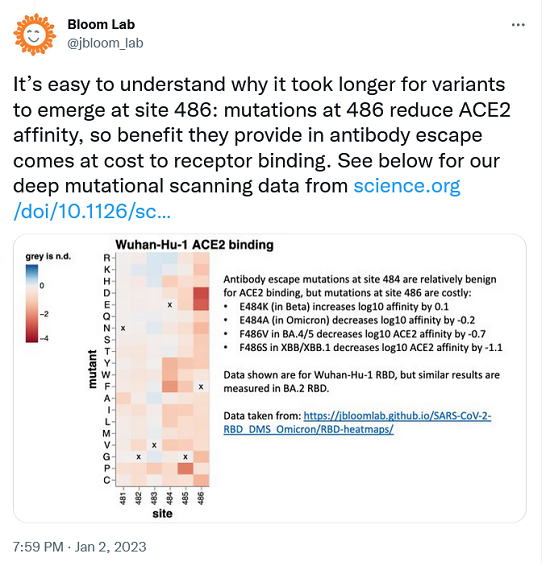 10) So variants like XBB/XBB.1 fixed mutation (F486S) that was beneficial for antibody escape but detrimental to ACE2 affinity. In other words, they made an evolutionary tradeoff.

11) But as @LongDesertTrain noticed months ago, our deep mutational scanning shows one mutation at site 486 is not so bad for ACE2 affinity, especially in background of BA.2: F486P 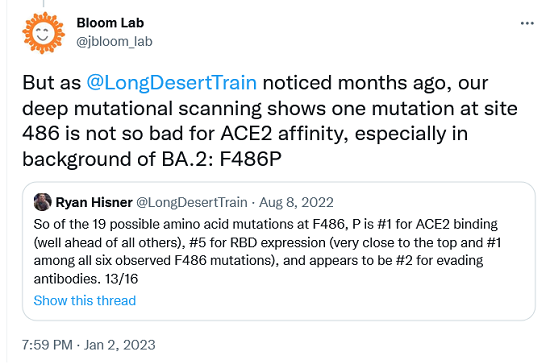 13) Difference between XBB.1.5 and its immediate parent XBB.1 is that it has traded the more costly F486S mutation for F486P. Therefore, XBB.1.5 isn’t expected to have more antibody escape than XBB.1 (which already had mutated F486), but it should have greater ACE2 affinity. 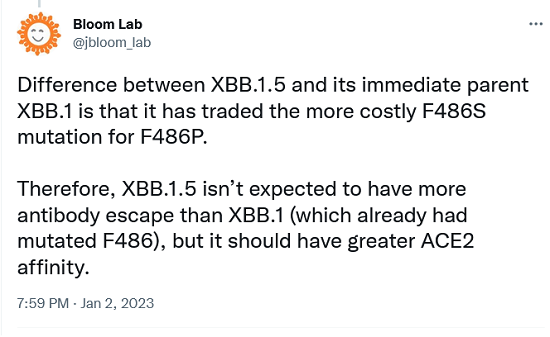 14) And as @yunlong_cao nicely describes, this is exactly what is directly measured: https://twitter.com/yunlong_cao/status/1607915567696203776. So it’s greater ACE2 affinity (and perhaps RBD stability) that is giving XBB.1.5 its boost in transmissibility, and causing it to surge. 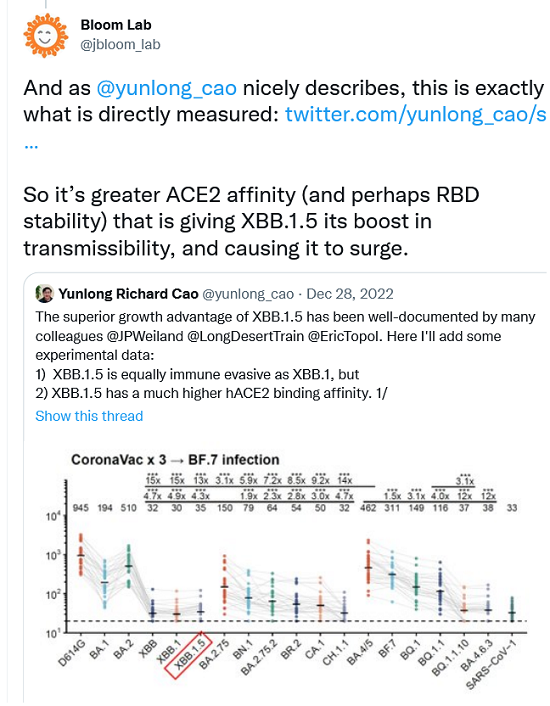 15) By the way, whether increase in fraction of cases due to XBB.1.5 will lead to surge in absolute number of cases is still not certain. But sometimes new variants drive increase in total cases, & in general human coronaviruses (& other respiratory viruses) surge in winter. 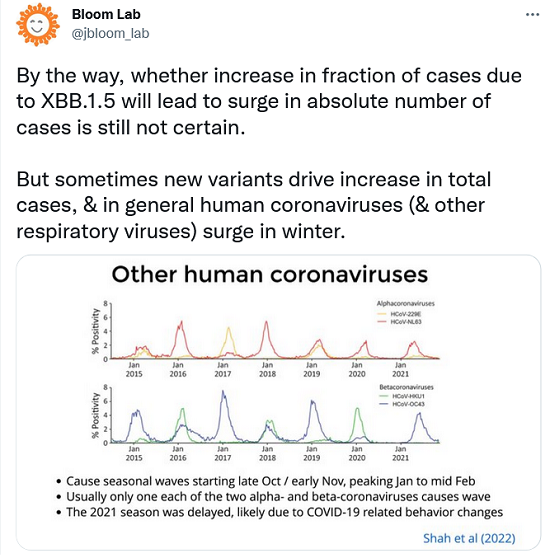 Many thanks to the Bloom Lab for putting together this very informative thread!

XBB.1.5 at a staggering FORTY PERCENT of sequences in the US