This is one of those very rare occasions when an entire Twitter thread is worth republishing as it answers so many common questions.

1: “You might be seeing a lot about XBB these days, & we’re in the process of adding it to Nextstrain, Nextclade, & CoVariants (as 22F). You might also be hearing it’s a ‘recombinant’ – but what does that mean? Let’s take a look.”

2: “We’ve been hearing of recombinants for a while now (remember ‘Deltacron’?). They can sound scarier than they are! The process itself is likely common, but we only ‘see’ recombinants when someone is infected with two distinct lineages, with different mutation patterns.”

3: “When a virus copies itself, it can ‘template switch’ between different genomes floating around. If those are all the same, the end product isn’t different! But if distinct lineages are there at the same time, we can spot these ‘chimera’ children – recombinants!“ 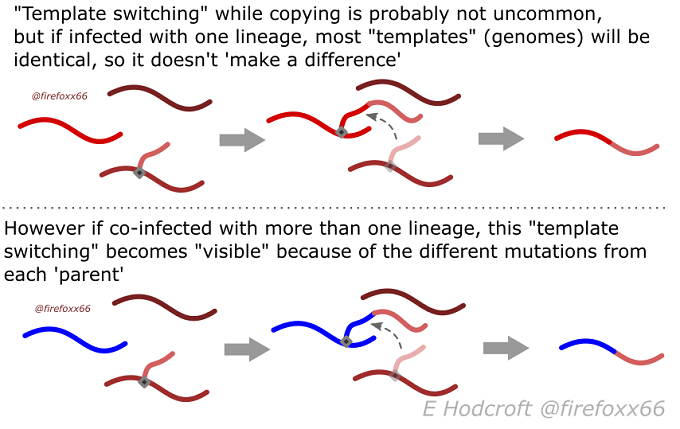 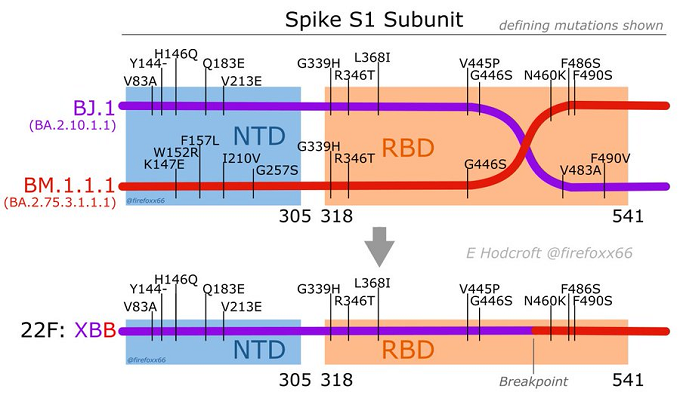 5: What’s particularly interesting about XBB is that we can narrow down the ‘breakpoint’ (where the genome switch happened) – since it has S:V445P (from BJ.1) and S:N460K (from BM.1.1.1), the breakpoint is likely somewhere in this small region.

6: “One thing worth remembering about any recombinant is that because of their ‘mixed genomes’ they won’t be accurately represented in standard phylogenetic trees – they usually appear near 1 parent & with a long branch to try and make up for all the ‘extra’ mutations.”

7: “As long as you realise it’s a recombinant, this can be fine – just be careful interpreting anything from that long branch! In Nextclade, recombinants are specifically moved to the base of the tree to highlight their ‘unconventional’ origins.“ 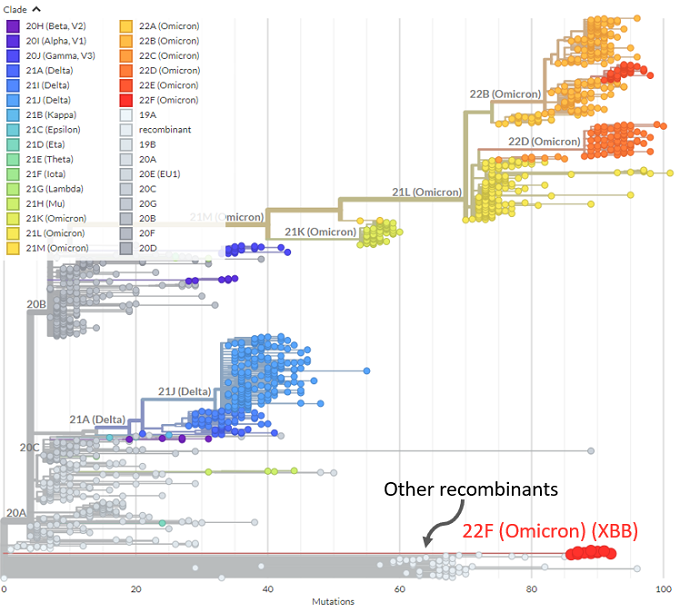 8: “There’s nothing inherently ‘worse’ about recombinants – they could be more or less fit than their parents, or have the same fitness. (Of course, if they are very unfit, we probably never see them!) There have been many of them in the pandemic, & most haven’t spread widely.”

9: Sometimes recombination can bring together mutations that offer a big advantage to the virus in some way, but this isn’t what always (or even often) happens. As with any new combination of variants, they need to be looked at & assessed individually!

Some Chinese scientists aren’t convinced of this rather benign outlook for SARS-CoV-2 recombinant variants however, and neither are we.

Emma is right in saying that, until now, recombinants haven’t been particularly successful, and that they have so far failed to create a variant that has persisted for any length of time. That may currently be the case, but every single SARS-CoV-2 recombination event that happens is a gamble that could quickly prove that statement wrong.

The fact that a recombinant variant hasn’t succeeded so far doesn’t rule out the possibility of a recombination event that simultaneously creates a more infectious AND a more pathogenic virus in future. This could also happen with a cross-species recombination event. Given the level of SARS-CoV-2 transmission across the globe, losing this particular bet is becoming ever more likely for humanity.

The potential for a Disease X like recombinant occurring is one of the best reasons humanity has for continuing to limit SARS-CoV-2 transmission.

China: “Deltacron Is Just the Beginning”: