There has been a significant rise in new SARS-CoV-2 infections in the Gauteng Province in the last four weeks which has been attributed to the new Omicron variant announced on 24 November 2021. The first cases of Omicron were detected in the Tshwane District and coincided with the sharp rise in new infections, heralding the onset of the fourth wave in Gauteng. 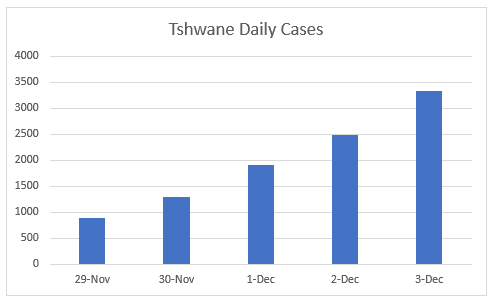 Tshwane has been the global epicentre of the Omicron Outbreak and the Gauteng Province Fourth Wave with the weekly number of cases rising exponentially over several weeks, reaching just over 8569 cases in Epi Week 47 (21 November -November 27 and 41 921 by 3 December before the end of Epi Week 48 (28 November to 4 December). The exponential rise in cases has continued with 9929 new cases reported in Tshwane in the last 5 days from 29 November to 3 December 2021 (Figure 1).

We report on the early experience of the patient profile at the Steve Biko/Tshwane District Hospital Complex in Pretoria, in the heart of the Tshwane District.