Just one day after we suggested that China’s recent Covid death toll would be “horrendous“, Chinese authorities have announced that there have been 60,000 Covid deaths for the month of December 2022 alone.

The newly released data shows that 60,000 people have died of Covid in one month following the lifting of restrictions on December 8th 2022.

China’s health authorities on Saturday (Jan 14) reported almost 60,000 COVID-related deaths in just over a month, the first major death toll released by the government since the loosening of its virus restrictions in early December.

According to a National Health Commission (NHC) official, China recorded 59,938 COVID-related deaths between Dec 8, 2022, and Jan 12.

The figure refers only to deaths recorded at medical facilities, with the total toll likely to be higher.

This newly released data has yet to appear in any statistics charts as of 15th January 2023, but it will represent by far the largest increase in reported Covid-19 deaths for any country for the entire pandemic.

The release of this information will soon cascade down to affect dozens of international Covid metrics such as the global case fatality rate and the global death rate. It also confirms the suspicions of many health commentators that the Covid data previously released by China has been far from complete.

The latest data from China still remains incomplete and insufficient, however. It doesn’t cover deaths from Covid-19 that occurred outside of hospitals, for example, and the definition of a Covid death in China will continue to lead to substantial under-reporting. This is not in the best interests of China, nor is it in the best interests of the global community in its attempts to fight the virus.

Given the obvious omissions in the new Chinese data release, Covid deaths for the last month in China will more likely have been in the hundreds of thousands, rather than tens of thousands.

A quick calculation suggests the latest figures for deaths from China are almost certainly a large underestimate. In highly-vaccinated Singapore, for example, Covid deaths currently represent about 0.08% of cases. The 60,000 deaths in China would therefore equate to about 75 million cases of Covid if the infection fatality rates were similar. You can already see the problem.

Indeed, our in-house estimate for likely Covid fatalities within China, if all restrictions were lifted in December 2022, was for 30 million deaths to occur within the next three years. We sincerely hope our projections are wrong this time, but when a previously shielded and immune naive population meets an ongoing full scale pandemic, the results are very unlikely to be as mild as many imagine.

Update 1 – Full transcript of the Chinese press conference that announced these latest figures:

Transcript of the press conference of the joint prevention and control mechanism of the State Council on January 14, 2023

Update 2 – Hospitalizations and ICU referrals may be higher in China

An interesting Twitter thread below suggesting that, based on the data given at the press conference, Covid hospitalizations and ICU referrals may be much higher in China than in many European countries. Hospitalizations are shown as a pink band at the top of the diagram due to uncertainties over how the data is gathered. 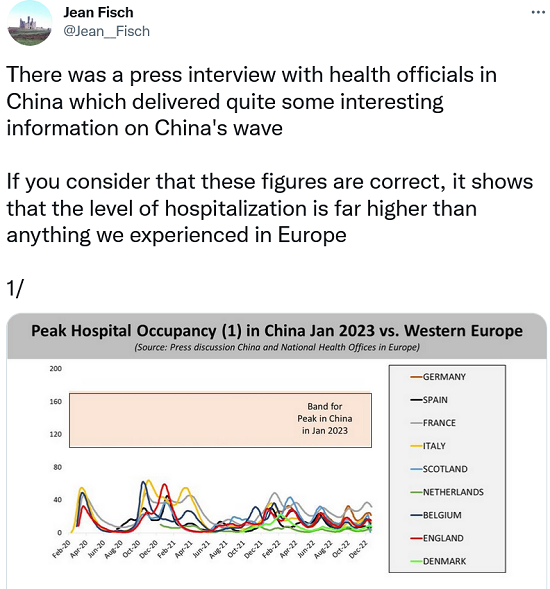