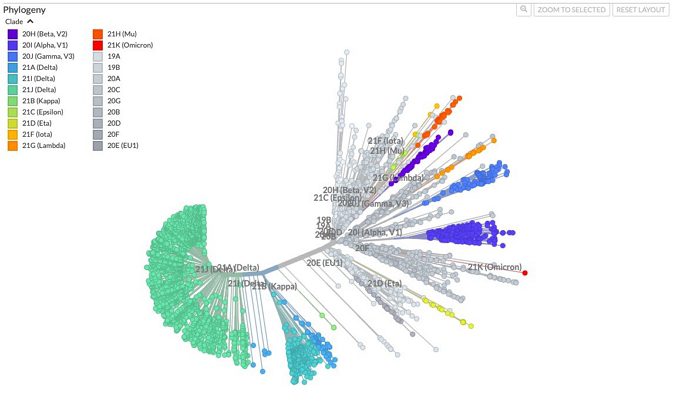 An extraordinary claim in a research paper just released: that the Omicron variant could be a product of artificial genetic modification.

A method to find a probability that a given bias of mutations occur naturally is proposed to test whether a newly detected virus is a product of natural evolution or artificial genetic modification.

Research paper: A probabilistic approach to evaluate the likelihood of artificial genetic modification and its application to SARS-CoV-2 Omicron variant

A tweet from one of the authors of the paper: 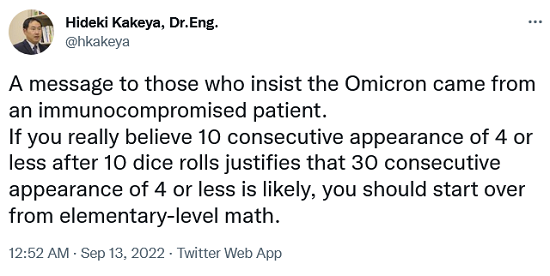 We believe that Dr Kakeya may be referring to the Twitter thread from the Bloom lab…. 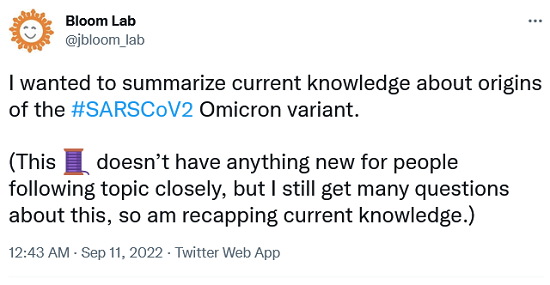 Admirable though it is, the Twitter thread from the Bloom lab fails to take into account the considerable circumstantial evidence that Omicron was already circulating internationally before it was first officially identified in South Africa.

Some of the first cases of the Omicron variant of the coronavirus to be detected in Botswana — which were among the first known in the world — were in foreign diplomats who had traveled to the country from Europe, the country’s president said.

President Mokgweetsi Masisi told CNN on Thursday that four diplomats who tested positive for the coronavirus on Nov. 11, and who were later found to be carrying the new variant, “came from a number of countries.” He added: “Yes, some had been to Europe, and some had been elsewhere.” He did not offer more details.

Omicron was found earlier than the first official case in England, Nigeria and the US:

[Omicron] was first detected in South Africa and Botswana in early November 2021. Retrospective testing has since found earlier samples from individuals in England on 1 and 3 November, and in South Africa, Nigeria and the United States on 2 November.

An analysis of the mutation rate in hundreds of sequenced genomes, and of how quickly the virus had spread through populations by December, dates its emergence to not long before that — around the end of September or early October 2021.

We also noted in the post below, for example, that “There is accumulating evidence that some of the Omicron cases turning up in the UK predate the first cases announced in South Africa,” – hence our reference to its “murky origins” below:

The theory that the Omicron variant might be artificial in nature is not as outlandish as it at first seems. There was a lot of speculation about its murky origins when the variant was first identified. In December 2021, some even wondered whether the variant might have been intentionally created and then released as a type of self-spreading vaccine, presumably to counter the deadly Delta variant that had been prominent earlier that year. We can certainly think of a few nations across the globe where that sort of proposal might have been quietly entertained…

Bill Gates: “Omicron, is a type of vaccine…”

Does Omicron predate even the original Wuhan wild type virus? Preprint: Evidence for a mouse origin of Omicron