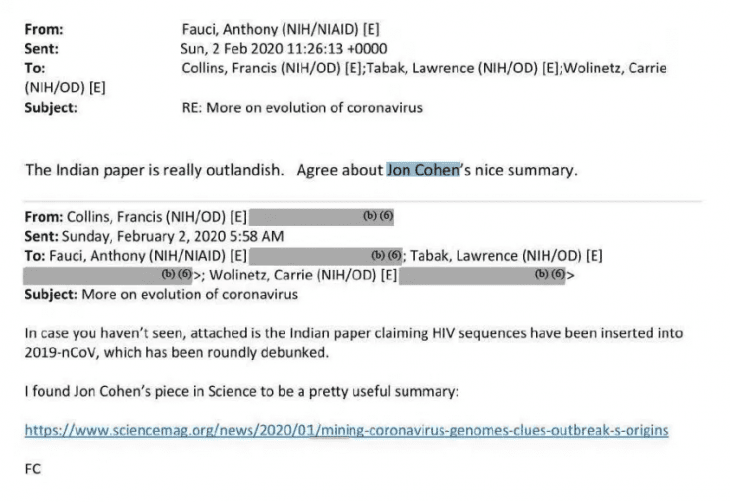 “One of such studies that was brought to the notice of Fauci was a research paper by some scientists from India. In January 2020, Indian researchers had published a paper, where they had found that the spike glycoprotein (S) of SARS-CoV-2 had four insertions which are not found in any other Coronavirus, and the insertions are similar to those found in HIV virus. The study had raised that possibility that SARS-CoV-2 may have been bio-engineered using the existing Coronavirus and HIV virus.”

Preprint: Uncanny similarity of unique inserts in the 2019-nCoV spike protein to HIV-1 gp120 and Gag

A day after the authors withdrew the above paper, on 2 February 2020, the director of the Center for Emerging Infectious Diseases at the Wuhan Institute of Virology, Shi Zhengli, and her team, published the sequence of a bat coronavirus called RaTG13 in what was the very first paper to properly describe and characterise what would eventually become known as the SARS-CoV-2 virus.
​

OpIndia talked to Ashutosh Kumar Pandey, one of the researchers of the study. Earlier he had commented on Twitter that they stand by their conclusion that the SARS-CoV-2 is not natural. “We said this in Jan 2020, we are saying it again”, he had tweeted.