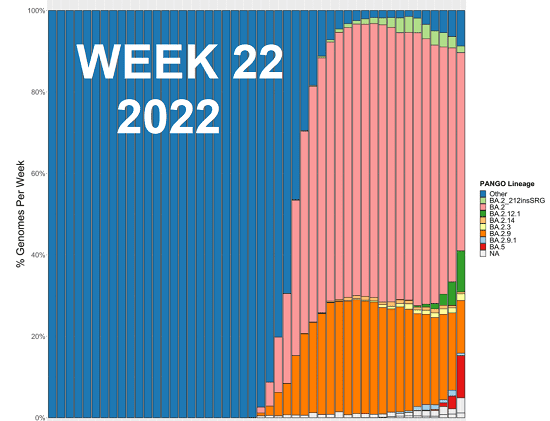 The latest weekly epidemiological file for Denmark has just been published. It shows BA.5 is now doubling every week and BA.2.12.1 is also steadily increasing. Both variants now have ~10% share of SARS-CoV-2 sequences.

BA.5 and BA.2.12.1 are just two of around FORTY different Omicron variants circulating in Denmark. 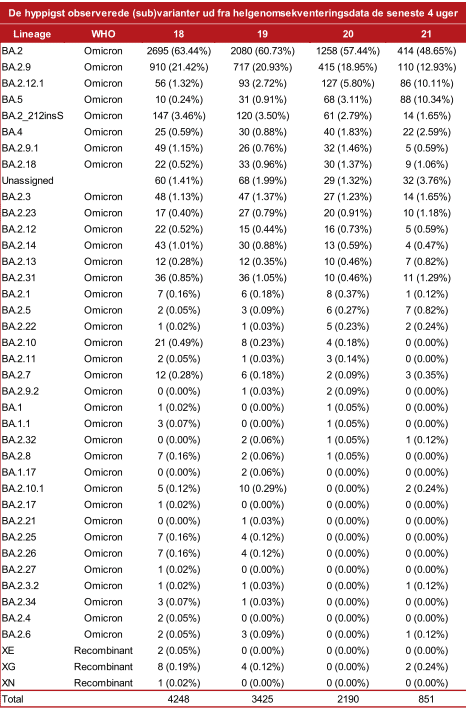 Although infection numbers are apparently decreasing nationally, Covid-19 hospitalizations in Denmark seem to be increasing once again: 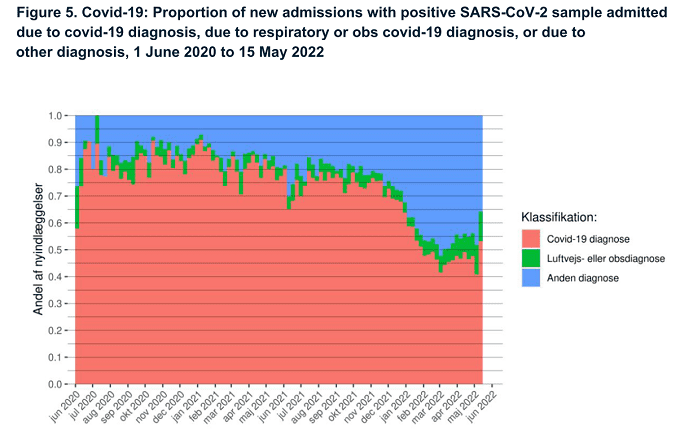 “BA.2 and sub-variants are still dominant in Denmark, however, with a declining share of approximately 87% in total. An average weekly increase in the number of infected has been seen corresponding to 135% and 52% respectively for the subvariants BA.5 and BA.2.12.1 in weeks 17-20. These variants each amount to approximately 10% of the sequenced samples in week 21. However, a reservation must be made that a particularly large number of samples have not yet been sequenced in week 21.

Overall, a signal of stabilization in the concentration of SARS-CoV-2 in waste water sampling has been seen in the recent weeks after a continuous fall in the period from start/mid-February until the beginning of May. There are not yet signals of rising case numbers based on PCR testing but this should be seen in the light of continuous test activity. The positive percentage is stable in week 21 but with a continued variation across age groups, where the age groups between 60 and 79 years continues to have higher case numbers than the younger age groups and a rising positive percentage between week 20 and 21.

On this background, it is continuously expected that case numbers with SARS-CoV-2 will drop further over the coming weeks as test activity continues dropping. However, the waste water surveillance shows signs of a stabilizing concentration of SARS-CoV-2 and perhaps a slight increase in parts of the country, which can be a signal of rising incidence in segments of the population, who are not tested. Simultaneously, there is a growth in sub variants BA.5 and BA.2.12.1 and both sub-variants constitute more than 10% of the sequenced tests in week 21. There are thus signs of both sub-variants are growing. The emergence of BA.5 and BA.2.12.1 can increase the risk of rising infection rates as has been seen in other countries. Furthermore, there is a rise in the proportion of sequenced test with subvariants BA.5 and BA.2.12.1, which in recent weeks has doubled respectively every week and every other week.”