Cases of West Nile Virus infection in humans in Italy have more than doubled in the last week.

Since the beginning of June 2022, 94 cases of West Nile Virus have been confirmed in Italy; 55 of these manifested themselves in the neuro-invasive form (16 Emilia-Romagna, 33 Veneto, 4 Piedmont, 2 Lombardy).

7 deaths from West Nile Virus were reported: 5 in Veneto, 1 in Piedmont and 1 in Emilia-Romagna.

The first human case of the West Nile season was reported by Veneto in June in the province of Padua. From the last bulletin issued today it emerges that 19 cases were identified in blood donors (3 in Lombardy, 11 in Veneto, 4 in Emilia Romagna, one in Piedmont), 19 cases of fever (2 in Lombardy, 16 in Veneto , one in Emilia-Romagna) and a symptomatic case (Veneto). The previous bulletin (issued last July 26) reported 42 confirmed cases of infection in humans.

West Nile virus (WNV) is a single-stranded RNA virus that causes West Nile fever. It is a member of the family Flaviviridae, from the genus Flavivirus, which also contains the Zika virus, dengue virus, and yellow fever virus. The virus is primarily transmitted by mosquitoes, mostly species of Culex. The primary hosts of WNV are birds, so that the virus remains within a “bird–mosquito–bird” transmission cycle. The virus is genetically related to the Japanese encephalitis family of viruses.

Humans and horses both exhibit disease symptoms from the virus, and symptoms rarely occur in other animals. Identification of the human disease was first made in 1937 in Uganda and in the latter half of the 20th century spread to many other parts of the world. 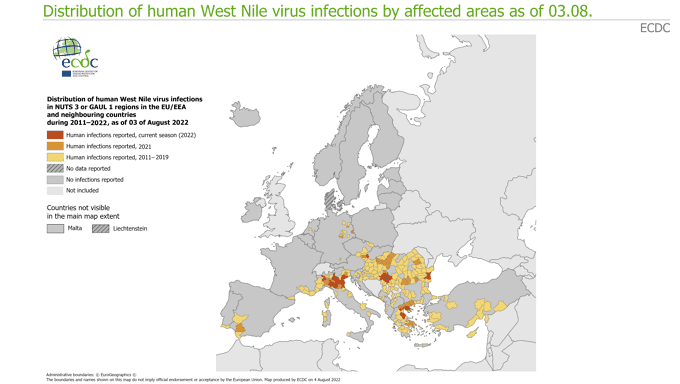