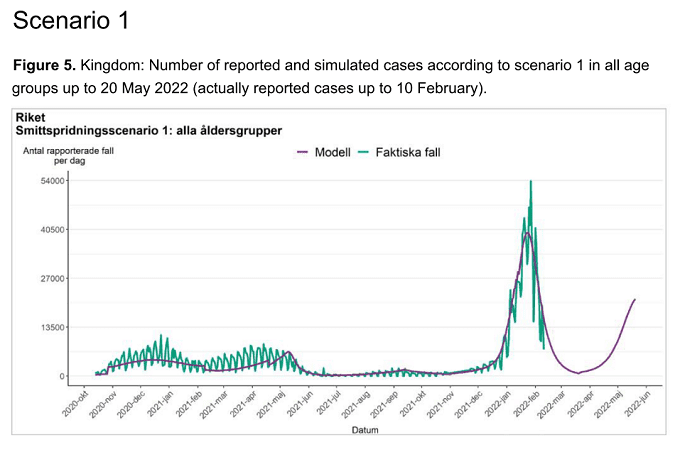 Sweden has just published a document outlining two scenarios for the future of the pandemic over the next few months. The first scenario is a continuation of the current decline of the Omicron variant. The second scenario, however, gives a possible date of March 20th for a new variant of “special importance” to appear and cause a resurgence of the pandemic.

The following translation is a direct quote from the Swedish Public Health Agency:

Scenario 0: Continued spread of the Omicron variant. The spread of infection decreases to flatten out and lie at very low levels from March until the summer

Scenario 1: A hypothetical new virus variant of particular importance is assumed to be developed and introduced around March 20, which is as contagious as omicron. Among people previously infected with omicron, the protective effect against the new virus variant is assumed to decrease after three months. In scenario 1, the spread of infection will increase in the spring of 2022 and reach a peak in mid-May.

Scenario 1 should be seen as an illustration of a hypothetical development. This is in case a new virus variant of special importance, which has an ability to circumvent the protective effect of both vaccination and previous infection, should appear and take over. The Swedish Public Health Agency does not consider the development in scenario 1 to be probable, but it cannot be ruled out.

From Folkhalsomyndigheten.se web page (in Swedish)

We have machine translated the scientific paper underpinning the two scenarios outlined above and have republished it below in English. It can also be downloaded from here (in Swedish)


“A hypothetical new virus variant of particular importance is assumed to be developed and introduced around March 20 2022”??

Are they referring to a Variant of High Consequence or VOHC?

UDPDATE:  Hospitalization numbers in Sweden up to 31st March 2020 (because test figures are now so unreliable) 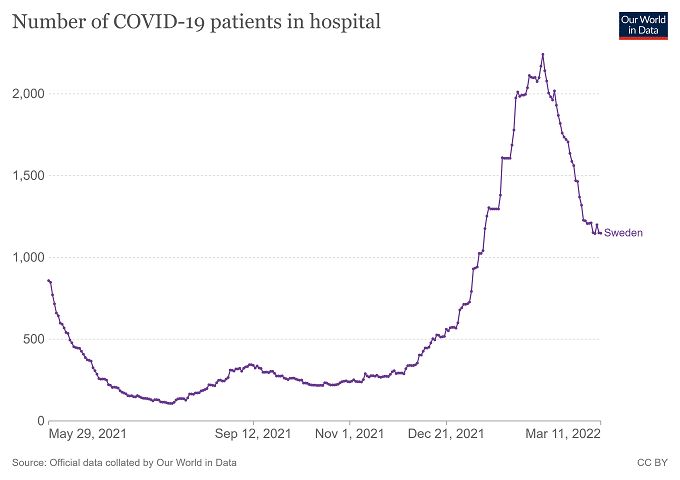