Several tabloid newspapers across the globe are referring to a briefing note sent out by the UKHSA recently about the possibility of World Cup fans bringing MERS infections back from Qatar, but the document doesn’t seem to be available publicly. This NDTV report carries the information from the UKHSA that has been republished by many other newspapers.

On the 2nd December, the Australian Health Department issued a warning about possible MERS infections for fans attending the World Cup:

Anyone travelling from the Middle East, including returning to Australia from attending the 2022 FIFA World Cup, should be aware of Middle East respiratory syndrome (MERS).

MERS is a rare but severe respiratory illness that may affect travellers to Middle Eastern countries.

It is spread through close contact with camels carrying the virus or an infected person, or by consuming uncooked camel meat or unpasteurised camel milk.

There is currently no vaccine available. Reduce your risk of getting MERS by observing good hygiene practices, avoiding close contacts with camels and avoiding consuming uncooked meat or unpasteurised milk.

A MERS-COV/SARS-CoV-2 recombinant certainly seems to be technically possible, but MERS-COV is known to have a very high fatality rate, and we haven’t seen any evidence so far of the sort of mass casualties we would expect to see if there were a large-scale MERS-CoV outbreak or a recombination with SARS-CoV-2 had taken place.

Key points from the preprint research:

“Given the co-circulation of MERS-CoV and SARS-CoV-2 in the Middle East, it raises concerns about the possibility of genomes recombining if present simultaneously in a reservoir (camels) or a host (humans). Given the high mortality rate of MERS-CoV (35%) and contagiousness of SARS-CoV-2, one could only imagine the worst.”

“Given the high recombination rates detected in SARS-CoV-2, we speculate that in co-infections recombination is feasible via TRS and/or clusters of homologies”

“At the transcription level, both viruses utilise identical Transcription Regulatory Sequences (TRSs), which are known recombination cross-over points during replication, to transcribe genes.”

“Using whole genome alignments of both viruses, we identify clusters of high sequence homology at ORF1a and ORF1b.”

Preprint: The Recombination Potential between SARS-CoV-2 and MERS-CoV from Cross-Species Spill-over Infections

There is already widespread manipulation of this story by the mainstream media with MERS-CoV now jokingly referred to as “camel flu”.  With a >35% fatality rate, MERS-CoV is no joke. 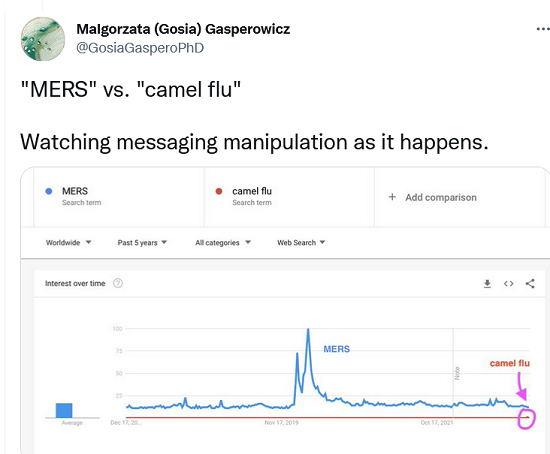 Africa: The Andromedary Strain – the next coronavirus pandemic waiting in the wings