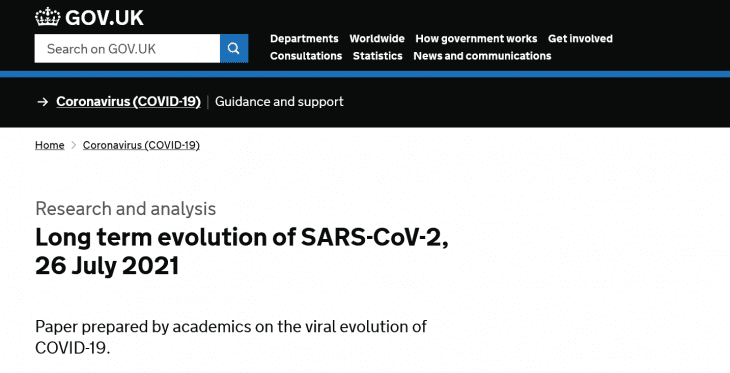 Scenario One: A variant that causes severe disease in a greater proportion of the population than has occurred to date.  Scenario Two: A variant that evades current vaccines.  Scenario Three: Emergence of a drug resistant variant after anti-viral strategies.  Scenario Four: SARS-CoV-2 follows an evolutionary trajectory with decreased virulence.

Scenario One: A variant that causes severe disease in a greater proportion of the population than has occurred to date. For example, with similar morbidity/mortality to other zoonotic coronaviruses such as SARS-CoV (~10% case fatality) or MERS-CoV (~35% case fatality).

Scenario Two: A variant that evades current vaccines. This could be caused by: Antigenic ‘shift’: Natural recombination events that insert a different spike gene sequence (or partial sequence) from human CoVs MERS-CoV (highly unlikely due to the low frequency of MERS-CoV infections), or from currently circulating endemic human CoVs (more likely due to the prevalence of these viruses). This would recombine into the ‘body’ of SARS-CoV-2 that is capable of high replication in human cells. The consequence could be a virus that causes disease at a level similar to COVID-19 when it first emerged but against which our current battery of spike glycoprotein-based vaccines would not work.

Scenario Three: Emergence of a drug resistant variant after anti-viral strategies. This could be caused by: Emergence of new variants following the administration of directly acting antiviral therapies. As we begin to use directly acting antiviral drugs it is highly likely a variant will be selected that had resistance to individual agents. For example, drugs that target the viral 3C protease, drugs that target the polymerase, monoclonal antibodies that target the spike glycoprotein. If the drugs are used as a mono therapy, then resistant variants have a high probability of emerging. This may render all drugs in that category unusable.

Likelihood: Likely – unless the drugs are used correctly.

Scenario Four: SARS-CoV-2 follows an evolutionary trajectory with decreased virulence. This could be caused by: Variants arising with increased transmissibility but decreased pathogenesis/virulence as the virus becomes fully adapted to the human host becoming an endemic infection. Coupled with the likelihood of eventual high populations immunity the infection produces less disease. In other words, this virus will become like other human CoV that causes common colds, but with much less severe disease predominantly in the old or clinically vulnerable.

Likelihood: Unlikely in the short term, realistic possibility in the long term.

So what is Plan B if the vaccines fail?