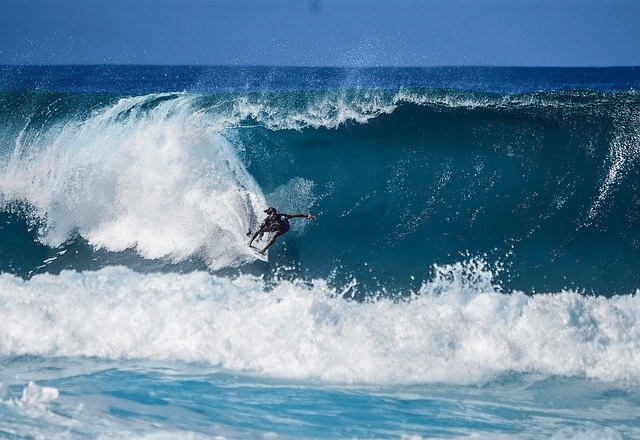 Global Covid waves are formed by smaller continental waves combining to create the unique global sine wave pattern we have seen in 2021.

The chart below shows the global Covid wave pattern from 2021. Let’s take it apart and look at the constituent elements of each wave. We’ll be using a biweekly view for these charts as it smooths out a lot of the jitter and gives a clearer picture of wave direction. 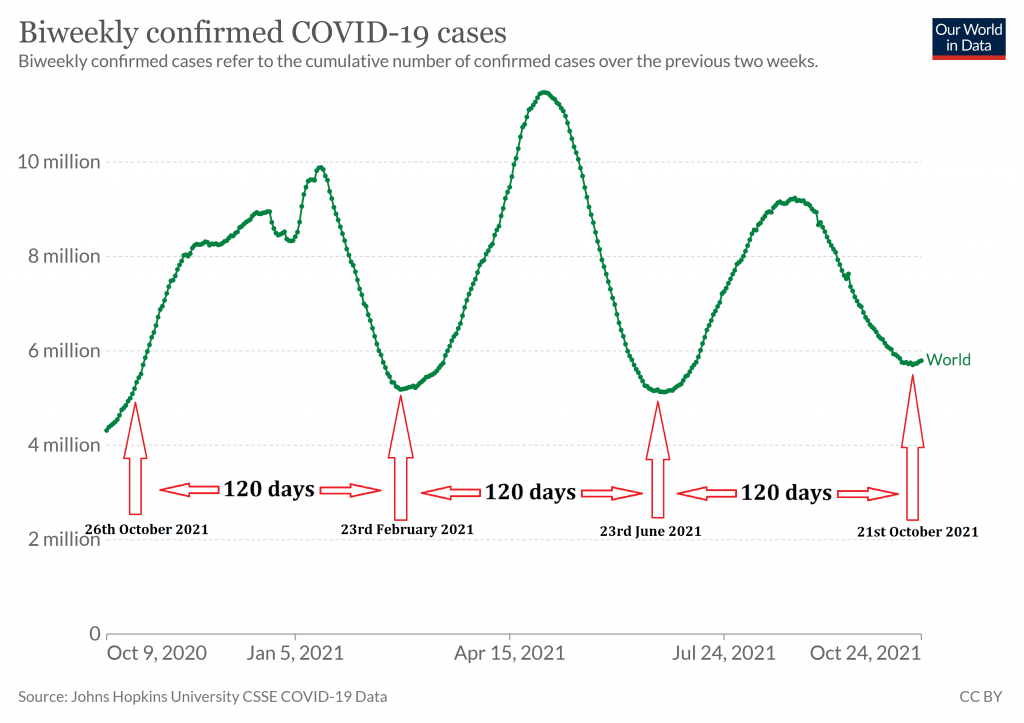 The chart below shows the constituent elements of the three global Covid waves of 2020 and 2021. It shows which continents contributed to each wave.

We have included India in this chart as it was such a major factor in the second global wave. We have separated North America and South America as their respective waves are not linked, and we have excluded Africa from the chart as its recorded cases have been too low to make an impact on the global situation.

You can see from the above chart that two continents were largely responsible for the first major winter wave from October 2020 to February 2021. They were Europe and North America.

Both of the North American and European winter waves of October 2020 to February 2021 were largely blunted by national lockdowns, local lockdowns and lower case recording over the winter holidays. The first winter wave of 2020-2021 would have undoubtedly been the largest wave of the past year had it not been for those mitigating measures.

As we mentioned earlier, Asia, (notably India) was the chief contributor to the second global wave, from February 2021 to June 2021.

The third global wave from June 2021 to October 2021 largely consisted of cases from Asia, North America and Europe.

It’s already apparent that Europe will play a large role in the coming winter wave from October 2021 to February 2022, but which continents will accompany it?

Every other continent is currently on the downward slope from a wave, none have yet shown an inflexion point or upward curve in Covid cases indicating a new wave forming.

We have seen, however, increasing Covid activity in both China and Singapore this week, and news this morning of a sudden spike in Covid deaths in India attracted our attention, particularly as it seems to be occurring without a corresponding increase in Covid cases. The increase in Indian deaths also began close to the anniversary of last year’s global infection point for Covid deaths that happened on the 19th October 2020. 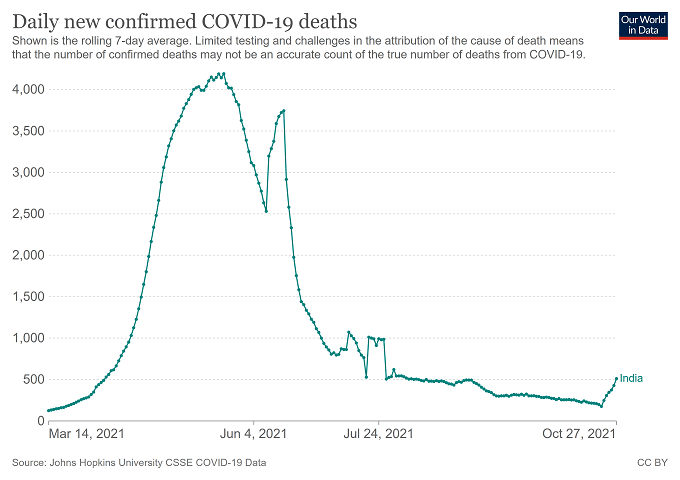 North America is a few weeks behind Asia in its exit slope. Its earlier than expected summer wave in 2021 has put it slightly out of sync with its previous waves. South America has yet to contribute to a global wave in any significant manner.

So, on the basis of the second chart above, it would seem that Europe and Asia would be the most likely contributors to a new global winter wave. A fresh wave in North America could begin within weeks though, perhaps as early as November 2021. A combination of waves from these three continents would be a repeat of the last wave. It could be the largest global wave of the pandemic so far as many of the mitigations used last year appear to have been abandoned.

In our next post, we will be trying to predict future Covid waves on a continental level and a national level by using repeating code snippets – the same method we used successfully in this post and in this post